You are here: Home › Depression Improves After Vitamin D Deficiency Treatment
By Christopher Fisher, PhD on June 27, 2012 in CAM, Depression 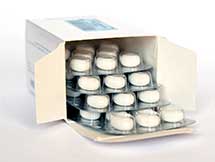 Women with moderate to severe depression had substantial improvement in their symptoms of depression after they received treatment for their vitamin D deficiency, a new study finds. The case report series will be presented Saturday at The Endocrine Society’s 94th Annual Meeting in Houston.

Because the women did not change their antidepressant medications or other environmental factors that relate to depression, the authors concluded that correction of the patients’ underlying shortage of vitamin D might be responsible for the beneficial effect on depression.

“Vitamin D may have an as-yet-unproven effect on mood, and its deficiency may exacerbate depression,” said Sonal Pathak, MD, an endocrinologist at Bayhealth Medical Center in Dover, Del. “If this association is confirmed, it may improve how we treat depression.”

Pathak presented the research findings in three women, who ranged in age from 42 to 66. All had previously diagnosed major depressive disorder, also called clinical depression, and were receiving antidepressant therapy. The patients also were being treated for either Type 2 diabetes or an underactive thyroid (hypothyroidism).

Because the women had risk factors for vitamin D deficiency, such as low vitamin D intake and poor sun exposure, they each underwent a 25-hydroxyvitamin D blood test. For all three women, the test found low levels of vitamin D, ranging from 8.9 to 14.5 nanograms per milliliter (ng/mL), Pathak reported. Levels below 21 ng/mL are considered vitamin D deficiency, and normal vitamin D levels are above 30 ng/mL, according to The Endocrine Society.

Over eight to 12 weeks, oral vitamin D replacement therapy restored the women’s vitamin D status to normal. Their levels after treatment ranged from 32 to 38 ng/mL according to the study abstract.

After treatment, all three women reported significant improvement in their depression, as found using the Beck Depression Inventory. This 21-item questionnaire scores the severity of sadness and other symptoms of depression. A score of 0 to 9 indicates minimal depression; 10 to 18, mild depression; 19 to 29, moderate depression; and 30 to 63, severe depression.

One woman’s depression score improved from 32 before vitamin D therapy to 12, a change from severe to mild depression. Another woman’s score fell from 26 to 8, indicating she now had minimal symptoms of depression. The third patient’s score of 21 improved after vitamin D treatment to 16, also in the mild range.

Other studies have suggested that vitamin D has an effect on mood and depression, but there is a need for large, good-quality, randomized controlled clinical trials to prove whether there is a real causal relationship, Dr Pathak said.

“Screening at-risk depressed patients for vitamin D deficiency and treating it appropriately may be an easy and cost-effective adjunct to mainstream therapies for depression,” she said.