In one of the first studies to look at transcranial magnetic stimulation (TMS) in real-world clinical practice settings, researchers at Butler Hospital, along with colleagues across the U.S., confirmed that TMS is an effective treatment for patients with depression who are unable to find symptom relief through antidepressant medications.

The study findings are published online in the June 11, 2012 edition of Depression and Anxiety in the Wiley Online Library.

Previous analysis of the efficacy of TMS has been provided through more than 30 published trials, which yielded generally consistent results supporting the use of TMS to treat depression when medications were not sufficient.

“Those previous studies were key in laying the groundwork for the FDA to approve the first device for delivery of TMS as a treatment for depression in 2008,” said Linda Carpenter, MD, lead author of the report and chief of the Mood Disorders Program and the Neuromodulation Clinic at Butler Hospital. “Naturalistic studies like ours, which provide scrutiny of real-life patient outcomes when TMS therapy is given in actual clinical practice settings, are the next step in further understanding the effectiveness of TMS. They are also important for informing healthcare policy, particularly in an era when difficult decisions must be made about allocation of scarce resources.”

“As a multisite study collecting naturalistic outcomes from patients in clinics in various regions in the U.S., we were also able to capture effects that might arise from introducing a novel psychiatric treatment modality like TMS in non-research settings,” said Carpenter.

In all, the study confirms how well TMS works in diverse settings where TMS is administered to a real-life population of patients with depression that have not found relief through many other available treatments. 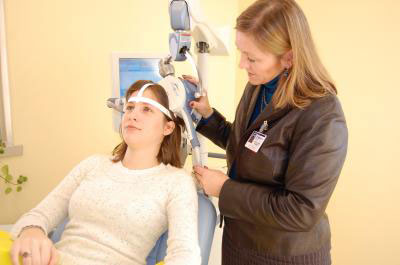 In one of the first studies to look at transcranial magnetic stimulation (TMS) in real-world clinical practice settings, researchers at Butler Hospital, along with colleagues across the US, confirmed that TMS is an effective treatment for patients with depression who are unable to find symptom relief through antidepressant medications. Credit: Butler Hospital

The published report summarized data collected from 42 clinical TMS practice sites in the US, and included outcomes from 307 patients with Major Depressive Disorder (MDD) who had persistent symptoms despite the use of antidepressant medication. Change during TMS was assessed using both clinicians’ ratings of overall depression severity and scores on patient self-report depression scales, which require the patient to rate the severity of each symptom on the same standardized scale at the end of each 2-week period. Rates for “response” and “remission” to TMS were calculated based on the same cut-off scores and conventions used for other clinical trials of antidepressant treatments. Fifty-eight percent positive response rate to TMS and 37 percent remission rate were observed.

“The patient outcomes we found in this study demonstrated a response rate similar to controlled clinical trial populations,” said Dr. Carpenter, explaining that this new data validates TMS efficacy in treating depression for those who have failed to benefit from antidepressant medications. “Continued research and confirmation of the effectiveness of TMS is important for understanding its place in everyday psychiatric care and to support advocacy for insurance coverage of the treatment.” Thanks in part to the advocacy efforts of Dr. Carpenter, TMS was recently approved for coverage by Medicare in New England, and it is also now covered by BCBSRI. “Next steps for TMS research involve enhancing our understanding of how to maintain positive response to TMS over time after the course of therapy ends and learning how to customize the treatment for patients using newer technologies, so TMS can help even more patients.”