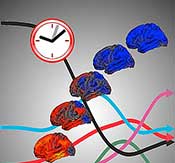 A national team of researchers led by investigators at the University of California, San Diego School of Medicine have developed a multidimensional set of brain measurements that, when taken together, can accurately assess a child’s age with 92 percent accuracy.

“We have uncovered a ‘developmental clock’ within the brain — a biological signature of maturation that captures age differences quite well regardless of other kinds of differences that exist across individuals,” said first author Timothy T. Brown, PhD, a developmental cognitive neuroscientist in the Department of Neurosciences at UC San Diego School of Medicine.

This study of the anatomy of the developing human brain, to be published in the September 25 print edition of Current Biology, addresses a long-standing scientific question about individual biological variability in children. It shows that, for certain structural measures, maturational differences in the developing human brain are much smaller than was previously thought – offering the first composite profile of different phases of brain development from ages 3 to 20 years.

Brown and principal investigators Terry Jernigan, PhD, professor of cognitive science at UC San Diego and Anders Dale, PhD, UC San Diego professor of neurosciences, collaborated with colleagues from Yale, Johns Hopkins and Cornell Universities, UCLA, USC, UC Irvine, UC Davis, the University of Massachusetts and the University of Hawaii. The study, the first published research from the group’s Pediatric Imaging, Neurocognition, and Genetics Study (PING), was supported by a two-year stimulus grant from the National Institutes of Health.

“Developmental clock” shows increases and decreases in brain’s cortical surface, as well as the dynamic cascade of many other brain measures, all changing with increasing age (from age 3-20). Credit – UC San Diego School of Medicine.

The researchers developed a structural set of brain measurements including features of neuro-anatomical development such as the shape, size and tissue properties of various parts of the brain, resulting in what the researchers call a multi-dimensional phase metric.

The team capitalized on key advances in structural magnetic resonance imaging, or MRI, using a standardized MRI protocol implemented at nine different institutions, using 12 different MRI scanners. Data was collected in a diverse sample of 885 typically developing children and teens, including information on anatomical brain features known to change over age; for example, measurements of cortical thickness and area, the volume of deep structures, tissue properties and signal intensities.

“No individual measurement closely reflects a child’s age across the childhood years because changes of different kinds cascade dynamically as development progresses. But taken together, the measurements reveal a phenotype that is tightly linked to the child’s chronological age,” said Jernigan. She added that this collection of multimodal, multisite imaging advances now makes it possible for researchers across institutions to establish large-scale, shared databases.

“Since this multi-dimensional MRI method is entirely objective, quantitative, and noninvasive, and can powerfully distinguish among different phases of maturity, we hope it might also be useful for the early detection of developmental brain disorders,” said Brown.