You are here: Home › Couple’s Psychotherapy Improves PTSD And Relationship
By Christopher Fisher, PhD on August 14, 2012 in Psychotherapy, PTSD 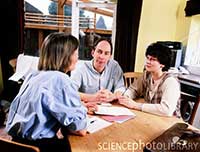 Among couples in which one partner was diagnosed as having posttraumatic stress disorder (PTSD), participation in disorder-specific couple therapy resulted in decreased PTSD symptom severity and increased patient relationship satisfaction, compared with couples who were placed on a wait list for the therapy, according to a study in the August 15 issue of JAMA, a theme issue on violence and human rights.

“There are well-documented associations between PTSD and intimate relationship problems, including relationship distress and aggression, and studies demonstrate that the presence of PTSD symptoms in one partner is associated with caregiver burden and psychological distress in the other partner. Although currently available individual psychotherapies for PTSD produce overall improvements in psychosocial functioning, these improvements are not specifically found in intimate relationship functioning. Moreover, it has been shown that even when patients receive state-of-the-art individual psychotherapy for the disorder, negative interpersonal relations predict worse treatment outcomes,” according to background information in the article.

Candice M. Monson, Ph.D., of Ryerson University, Toronto, Canada, and colleagues conducted a study to examine the effect of a cognitive-behavioral conjoint therapy (CBCT) for PTSD, designed to treat PTSD and its symptoms and enhance intimate relationships in couples. The randomized controlled trial, conducted from 2008 to 2012, included heterosexual and same-sex couples (n = 40 couples; n = 80 individuals) in which one partner met criteria for PTSD according to the Clinician-Administered PTSD Scale. Symptoms of PTSD, co-existing conditions, and relationship satisfaction were collected by assessors at the beginning of the study, at mid treatment (median [midpoint], 8 weeks after baseline), and at post-treatment (median, 16 weeks after baseline). An uncontrolled 3-month follow-up was also completed. Couples were randomly assigned to take part in the 15-session cognitive-behavioral conjoint therapy for PTSD protocol immediately (n = 20) or were placed on a wait list for the therapy (n = 20). Clinician-rated PTSD symptom severity was the primary outcome; intimate relationship satisfaction, patient- and partner-rated PTSD symptoms, and co-existing symptoms were secondary outcomes.

The researchers found that PTSD symptom severity and patients’ intimate relationship satisfaction were significantly more improved in couple therapy than in the wait-list condition. Also, change ratios (calculated by dividing the change in the CBCT condition from pretreatment to post-treatment by the change in the wait-list condition over this period) indicated that PTSD symptom severity decreased almost 3 times more in CBCT from pretreatment to post-treatment compared with the wait list; and patient-reported relationship satisfaction increased more than 4 times more in CBCT compared with the wait list.

“This randomized controlled trial provides evidence for the efficacy of a couple therapy for the treatment of PTSD and comorbid symptoms, as well as enhancements in intimate relationship satisfaction. These improvements occurred in a sample of couples in which the patients varied with regard to sex, type of trauma experienced, and sexual orientation. The treatment effect size estimates found for PTSD and comorbid symptoms were comparable with or better than effects found for individual psychotherapies for PTSD. In addition, patients reported enhancements in relationship satisfaction consistent with or better than prior trials of couple therapy with distressed couples and stronger than those found for interventions designed to enhance relationship functioning in nondistressed couples,” the authors write.

“Cognitive-behavioral conjoint therapy may be used to efficiently address individual and relational dimensions of traumatization and might be indicated for individuals with PTSD who have stable relationships and partners willing to engage in treatment with them.”