Researchers at the RIKEN Brain Science Institute (BSI) in Japan have uncovered two brain signals in the human prefrontal cortex involved in how humans predict the decisions of other people. Their results suggest that the two signals, each located in distinct prefrontal circuits, strike a balance between expected and observed rewards and choices, which enables humans to predict the actions of people with different values than their own.

Every day, humans are faced with situations in which they must predict what decisions other people will make. These predictions are essential to the social interactions that make up our personal and professional lives. The neural mechanism underlying these predictions, however, by which humans learn to understand the values of others and use this information to predict their decision-making behavior, has long remained a mystery.

Researchers at the RIKEN Brain Science Institute (BSI) in Japan have now shed light on this mystery with a paper to appear in the June 21st issue of Neuron. The researchers describe for the first time the process governing how humans learn to predict the decisions of another person using mental simulation of their mind. 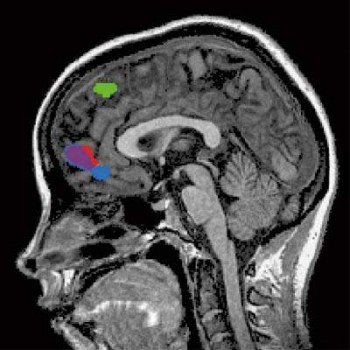 This figure shows the neural activity for the simulation of another person: Reward Signal (red) and Action Signal (green). The action signal shown in this figure (green) is in the dorsomedial prefrontal cortex. The activity of reward signal (red) largely overlaps with the activity of the signal for the self-valuation (blue) in the ventromedial prefrontal cortex. Credit: RIKEN. (click to enlarge)

Research scientists Shinsuke Suzuki and Hiroyuki Nakahara, a Principal Investigator of the Laboratory for Integrated Theoretical Neuroscience at RIKEN BSI, together with their collaborators, set out to disentangle these signals using functional Magnetic Resonance Imaging (fMRI) on humans. First, they studied the behavior of subjects as they played a game by making predictions about the other’s behavior based on the knowledge of others and their decisions. Then they generated a computer model of the simulation process to examine the brain signals underlying the prediction of the other’s behavior.

The authors found that humans simulate the decisions of other people using two brain signals encoded in the prefrontal cortex, an area responsible for higher cognition. One signal involves the estimated value of the reward to the other person, and is called the reward signal, referring to the difference between the other’s values, simulated in one’s mind, and the reward benefit that the other actually received. The other signal is called the action signal, relating to the other’s expected action predicted by the simulation process in one’s mind, and what the other person actually did, which may or may not be different. They found that the reward signal is processed in a part of the brain called the ventromedial prefrontal cortex. The action signal, on the other hand, was found in a separate brain area called the dorsomedial prefrontal cortex.

“Every day, we interact with a variety of other individuals,” Suzuki said. “Some may share similar values with us and for those interactions simulation using the reward signal alone may suffice. However, other people with different values may be quite different and then the action signal may become quite important.”

Nakahara believes that their approach, using mathematical models based on human behavior with brain imaging, will be useful to answer a wide range of questions about the social functions employed by the brain. “Perhaps we may one day better understand how and why humans have the ability to predict others’ behavior, even those with different characteristics. Ultimately, this knowledge could help improving political, educational, and social systems in human societies.”