You are here: Home › Does Electrical Contact Between The Human Body And Earth Affect Health?
By Stephen Elliott on April 20, 2011 in Featured, Psychophysiology 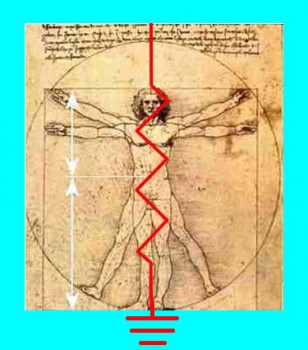 A growing body of evidence suggests that “earthing” – electrical connectedness to Earth, a.k.a. “grounding” affects human health. The recent book Earthing by Ober, Sinatra, and Zucker, as well as Nobel Prize winner James Oschman’s interest in the topic and sponsorship of Ober’s work brings attention to this matter.

To gain some understanding of the quantitative affects of grounding on health, M.D.s Karol and Pawel Sokal of the Military Clinical Hospital, Bydgoszcz, Poland conducted five different experiments wherein blood chemistry was assessed before and after subjects were electrically connected to Earth.

Find links to the original articles at the end of this page.

The basic earthing method involved electrically connecting the human subject to a copper plate measuring 60mm x 250mm placed upon damp ground.  A copper wire ran from this plate to a second plate secured to the lower part of each subject’s leg, the goal being emulation of the electrical connectedness of a bare human foot being placed firmly on the ground as might be so in a culture or circumstance where one is barefoot.

The rationale for their interest – as expressed, and that of Ober and Oschman, is whether our modern existence is resulting in malady and disease as a consequence of electrical insulation from Earth – Earth being “the reference ground” for the global electrical system and in theory “all life” – the latter being the question of interest. The potential problem arises due to our electrical “isolation” from Earth, i.e. we tend not to go barefoot, we tend not to sleep in contact with Earth, our homes and offices tend to be electrically insulated from Earth, etc.

The results of their study are quite striking…They find that across all 5 areas, statistically significant changes in blood chemistry occur when the human organism is grounded vs. when it’s not. Grounding yielded:

The authors emphasize that grounding results in calcium-phosphate homeostasis that is opposite that of weightlessness, where it is known that astronauts lose bone mass rapidly during space flight. The current understanding of this phenomenon is that it is the loss of gravity and weight bearing that interrupts normal bone maintenance. The Sokal’s postulate that the loss of Earth’s electrical influence on the body may be an important mediating factor.

Stephen Elliott has conducted research on grounding and human biopotential and holds US Patent # 7349194: Method and system for electrically connecting the human organism to Earth so as to facilitate an electrical current between the human biopotential and Earth for the purpose of promoting health, well-being, and performance. You can find out more about Stephen’s research here: http://www.coherence.com/press.htm

Chronic Disease: Are We Missing Something? by James Oschman, PhD.

Stephen is the principle author of The New Science of Breath and Coherent Breathing: The Definitive Method. He is an avid heart rate variability researcher and the inventor of the “Coherent Breathing” method as well as “Valsalva Wave Pro” – an instrument that monitors the blood wave in the circulatory system produced during resonant breathing (See www.coherence.com and www.valsalvawave.com, respectively).
View all posts by Stephen Elliott →

One Response to Does Electrical Contact Between The Human Body And Earth Affect Health?