You are here: Home › Behavioral Therapy Can Limit Tics In Adults With Tourette Syndrome
By Christopher Fisher, PhD on August 9, 2012 in Neurological, Psychotherapy 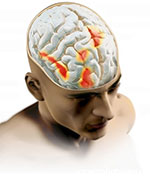 A comprehensive behavioral intervention is more effective than supportive therapy and education in helping adults control the tics associated with Tourette syndrome, according to an NIMH-funded study published in the August 2012 issue of the Archives of General Psychiatry. The study follows a previous study involving children with the disorder, which showed similar results.

Tourette syndrome (TS) is a chronic neurological disorder associated with motor or vocal tics that can be disruptive and difficult to control. Tics begin in childhood, typically peak in early adolescence and often decrease by adulthood. For some adults, the tics persist and can be difficult to control. Many individuals with TS describe an unwanted urge or sensation prior to the tic that is relieved by performing the tic. TS is commonly treated with an antipsychotic medication such as pimozide or risperidone. But these medications rarely eliminate tics entirely and can cause troubling side effects such as weight gain and sedation. Because of these adverse side effects, many patients decline or discontinue use of these medications. Until now, few large-scale studies have examined the effectiveness of behavioral interventions for TS.

The researchers randomized 122 adults at three research centers to either CBIT or a control treatment that included supportive therapy and education about TS. Each group received eight sessions over a 10-week period. Those who responded to therapy were assessed three months and six months after the end of the study period to determine if the therapy’s benefits persisted.

Results of the Study

Given the limited medication options for treating TS and the adverse effects associated with the antipsychotic medications, CBIT provides an alternative treatment to manage tics in children and adults. However, the positive response among adults was lower than among the children. The researchers suggest that people with tics that persist into adulthood may have a more chronic form of the disorder that is more difficult to treat.

Future research focused on CBIT may uncover the role of behavioral learning in reducing the involuntary movements and tics associated with TS. In the meantime, the researchers are working with the Tourette Syndrome Association and the Centers for Disease Control and Prevention to disseminate this intervention by offering training workshops to clinicians around the country.