You are here: Home › Brain Cell Networks Recreated With New View Of Memory Formation Activity
By Christopher Fisher, PhD on May 26, 2011 in Cognition, Neuroscience

University of Pittsburgh researchers have reproduced the brain’s complex electrical impulses onto models made of living brain cells that provide an unprecedented view of the neuron activity behind memory formation. The team fashioned ring-shaped networks of brain cells that were not only capable of transmitting an electrical impulse, but also remained in a state of persistent activity associated with memory formation, said lead researcher Henry Zeringue [zuh-rang], a bioengineering professor in Pitt’s Swanson School of Engineering.

Magnetic resonance images have suggested that working memories are formed when the cortex, or outer layer of the brain, launches into extended electrical activity after the initial stimulus, Zeringue explained. But the brain’s complex structure and the diminutive scale of neural networks mean that observing this activity in real time can be nearly impossible, he added. 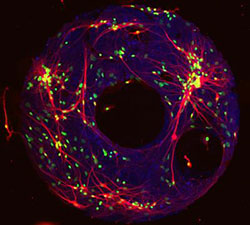 A fluorescent image of the neural network model developed at Pitt reveals the interconnection (red) between individual brain cells (blue). Adhesive proteins (green) allow the network to be constructed on silicon discs for experimentation. (Credit: U. Pittsburgh)

The Pitt team, however, was able to generate and prolong this excited state in groups of 40 to 60 brain cells harvested from the hippocampus of rats — the part of the brain associated with memory formation. In addition, the researchers produced the networks on glass slides that allowed them to observe the cells’ interplay. The work was conducted in Zeringue’s lab by Pitt bioengineering doctoral student Ashwin Vishwanathan, who most recently reported the work in the Royal Society of Chemistry (UK) journal, Lab on a Chip. Vishwanathan coauthored the paper with Zeringue and Guo-Qiang Bi, a neurobiology professor in Pitt’s School of Medicine. The work was conducted through the Center for the Neural Basis of Cognition, which is jointly operated by Pitt and Carnegie Mellon University.

To produce the models, the Pitt team stamped adhesive proteins onto silicon discs. Once the proteins were cultured and dried, cultured hippocampus cells from embryonic rats were fused to the proteins and then given time to grow and connect to form a natural network. The researchers disabled the cells’ inhibitory response and then excited the neurons with an electrical pulse.

Zeringue and his colleagues were able to sustain the resulting burst of network activity for up to what in neuronal time is 12 long seconds. Compared to the natural duration of .25 seconds at most, the model’s 12 seconds permitted an extensive observation of how the neurons transmitted and held the electrical charge, Zeringue said.

Unraveling the mechanics of this network communication is key to understanding the cellular and molecular basis of memory creation, Zeringue said. The format developed at Pitt makes neural networks more accessible for experimentation. For instance, the team found that when activity in one neuron is suppressed, the others respond with greater excitement.

“We can look at neurons as individuals, but that doesn’t reveal a lot,” Zeringue said. “Neurons are more connected and interdependent than any other cell in the body. Just because we know how one neuron reacts to something, a whole network can react not only differently, but sometimes in the complete opposite manner predicted.”

Zeringue will next work to understand the underlying factors that govern network communication and stimulation, such as the various electrical pathways between cells and the genetic makeup of individual cells.

Material adapted from University of Pittsburgh.