You are here: Home › Depolarizing The Debates About Pediatric Mental Health Diagnosis And Treatment
By Christopher Fisher, PhD on March 17, 2011 in Mental Health, Therapy 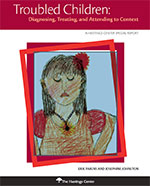 Decisions about whether and how to diagnose children with emotional and behavioral disturbances, and whether and how to treat them, are sometimes not clear-cut. When decisions lie within a “zone of ambiguity,” people who emphasize different value commitments can reach different but equally respectable conclusions. We need to tolerate these reasonable disagreements, according to a special report. Included in this post are links to watch a video summary of the process of depolarizing the debate, as well as a link to download the Special Report full-text PDF from Hastings Center Report on Pediatric Psychiatry.

However, one of the report’s disturbing conclusions is that many children with patently problematic moods and behaviors fail to receive the care recommended by experts. Systemic and cultural pressures compromise the diagnostic process and constrain the treatment choices of clinicians and parents, making it increasingly likely that medication is the only treatment children receive, even if the combination of medication and psychosocial treatment is recommended by experts.

The report is the culmination of a series of five workshops held by The Hastings Center and funded by the National Institute of Mental Health, which brought together an interdisciplinary group including psychiatrists, educators, parent advocates, social scientists, and bioethicists. The project was led by Erik Parens and Josephine Johnston, research scholars at The Hastings Center, who wrote the report. The report includes 10 commentaries from workshop participants, listed below.

The report takes a critical as well as a sympathetic look at long-running debates about how to interpret problematic moods and behaviors in children and about whether and how to intervene. It finds fundamental agreement that some children exhibit patently dysfunctional moods and behaviors and that these children deserve – though too often do not get – access to recommended care.

But the authors also describe inevitable disagreement about, for example, exactly where to draw the line between normal and unhealthy aggression or exactly how to balance the need for symptom relief and the need for schools and communities to accommodate a diverse range of children.

“What we’ve learned is that diagnoses don’t have clear boundaries – what counts as healthy and unhealthy anxiety or healthy and unhealthy aggression, for example, is not written in nature,” said Parens. “Human beings living and working in particular places and times define them. This leads to inevitable disagreements about whether a cluster of moods and behaviors is best understood as disordered, about how exactly to describe some symptoms, and about whether or which particular diagnosis is warranted.”

The growing number of children diagnosed with disorders like ADHD, bipolar disorder, and depression means that more children than ever are receiving psychotropic medications. This has given rise to controversies about the medications’ safety and efficacy and about the value and meaning of pharmacological treatment of childhood emotional and behavioral disturbances. Hastings Center Research Scholars Erik Parens and Josephine Johnston discuss their special report, Troubled Children: Diagnosing, Treating, and Attending to Context.

“One of our conclusions is that because diagnosis and treatment decisions invariably involve value commitments, there will be disagreements, especially on the margins and in difficult cases,” said Johnston. “How one weighs, for instance, the parental obligations both to shape children and to let them unfold in their own ways can influence how one responds to difficult diagnostic and treatment decisions.”

The report also concludes that too little is done to improve children’s environments that contribute to their problematic behaviors.

“We need to remove the barriers that stand in the way of optimal care for those children who are suffering from moods and behaviors that no one would consider normal or healthy,” the authors say.

The project was designed to better understand the controversies surrounding the diagnosis of mental disorders in children in the United States, and recent increases in the use of medications to treat those disorders.

It examined questions such as: Why are these diagnoses so controversial? Why do some people feel that children are over-medicated, while others are concerned about under-treatment? As different cultures have different rates of treatment with psychotropic medications, how much of what we see in the United States is driven by context—by individual, familial, or societal values?

The workshops, held over the course of three years, brought together clinicians, researchers, scholars, and advocates from a variety of backgrounds with widely diverse views. The first and last workshops considered the controversies generally, while each of the middle three workshops looked at them in the context of one diagnosis – attention deficit hyperactivity disorder, depression, or bipolar disorder.

The 10 commentaries from workshop participants are by:

Material adapted from The Hastings Center.

Additional Resource
Visit the Hasting Center web­site that is an online sup­ple­ment to this Hastings Cen­ter Report.