You are here: Home › Attractive People Attract More Attention To Their Unique Personality Traits
By Christopher Fisher, PhD on December 27, 2010 in Personality 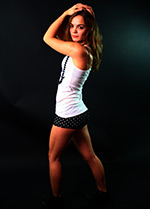 Psychological scientists spent a lot of time about a half-century ago trying to figure out who is the best judge of personality. You can see how this would be a useful skill for, say, a therapist or someone who conducts job interviews. But that research ground to a halt when they realized this was actually a much more complicated question than anyone thought, says Jeremy Biesanz, who cowrote the new study with Genevieve L. Lorenzo and Lauren J. Human, all from the University of British Columbia.

Biesanz and his colleagues decided to look at this old question from the other side. Rather than trying to work out who is better at perceiving personality, they wondered whether there are some people whose personality is better perceived. In this study, they considered whether attractiveness changes other people’s ability to get a sense of your personality.

For the study, volunteers met in groups of five to 11 people. The group carried out something a little like a cocktail party, but without the alcohol; every person chatted with every other person, in three-minute conversations. After each chat, each participant filled out a questionnaire on the person they had just been talking with, rating their physical attractiveness and what psychologists call the “big five” personality traits – openness, conscientiousness, extraversion, agreeableness, and neuroticism. Each person also rated their own personality.

As expected, people saw attractive conversation partners more positively. But they also saw their personalities more accurately. This seems a little counterintuitive – how could they have a positive bias and also be more accurate? But it is true. For example, if Jane is beautiful, organized, and somewhat generous, she will be viewed as more organized and generous than she actually is, but she will also be seen correctly as more organized than generous.

Biesanz suspects this is because we are more motivated to pay attention to physically attractive individuals. “You do judge a book by its cover, but a beautiful book leads you to read it more closely,” he says. Interestingly, this was noy only true for people who everybody agreed were attractive. If someone talked to a person who they found particularly attractive, they would perceive their personality more accurately. Biesanz notes that this is about first impressions of personality, in a setting like a cocktail party; the same might not be true for people who have known each other for longer.