You are here: Home › Virtual Reality Provides Returning Soldiers ‘Psychotherapy By Computer’ To Treat PTSD
By Christopher Fisher, PhD on May 17, 2011 in Psychotherapy, PTSD 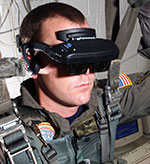 For those soldiers worried about the stigma associated with seeing a therapist, virtual reality applications for the treatment of post-traumatic stress disorder (PTSD) may be the alternative to the traditional “talk therapy.” A new paper by Albert Rizzo from the University of Southern California, Institute for Creative Technologies, Los Angeles, and his team, reviews how virtual reality applications are being designed and implemented across various points in the military deployment cycle, to prevent, identify and treat combat-related PTSD.

Their findings are published online in the June issue of Springer’s Journal of Clinical Psychology in Medical Settings, specially dedicated to contemporary psychological advances as they apply to soldiers and their families [2].

The stressful experiences that characterize the Operation Iraqi Freedom/Operation Enduring Freedom war fighting environments have produced significant numbers of returning military personnel at risk of developing PTSD. At the same time, virtual reality (VR) has stepped into clinical practice as a result of technological advances that have made it feasible and cost-effective to run VR systems on a personal computer.

What Rizzo and team’s work shows is that VR is able to deliver exposure therapy – the number one therapy recommended for PTSD – by immersing returning soldiers in simulations of trauma-relevant environments. The emotional intensity of the scenes can be precisely controlled by the clinician in collaboration with the patients’ wishes. VR allows multi-sensory and context-relevant cues that evoke the trauma without exclusively relying on the patient to actively remember and imagine actual experiences (as is required in traditional exposure approaches).

Rizzo and team review their immersive virtual reality exposure therapy (VRET) system for combat-related PTSD. Their application consists of a series of virtual scenarios, based on accounts by returning soldiers of what it is like out there in a war environment.

Their clinical results to date are encouraging. One test in particular found that 80 percent of those who completed treatment with this system showed clinically meaningful reductions in PTSD, anxiety, and depressive symptoms. In addition, anecdotal evidence from patient reports suggests improvements in their everyday lives for at least three months after treatment.

The researchers are also exploring other applications for their system, including stress resilience training (i.e., to teach soldiers coping strategies prior to deployment to better prepare them for the types of emotional challenges they are likely to encounter in the combat environment). Another area of interest for the system is the identification of those soldiers who are ready to get back into the field versus those who need further treatment or more time between deployments.

According to the authors, this new approach to psychotherapy has widespread ramifications: “The current generation of young military personnel, having grown up with digital gaming technology, may actually be more attracted to and comfortable with participation in virtual reality exposure therapy. The need for treatments to address the mental health needs of our military personnel, alongside the virtual revolution that has taken place, has led to a state of affairs which stands to transform the vision of future clinical practice and research.”