You are here: Home › Depression, Age, And Other Factors Linked To Dependence After Stroke
By Christopher Fisher, PhD on March 14, 2011 in Depression, Stroke 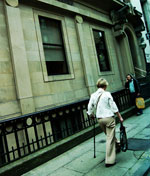 People who have a stroke are more likely to be dependent if they are depressed, older, or have other medical problems, according to a study published in the March 15, 2011, print issue of Neurology, the medical journal of the American Academy of Neurology.

“Post-stroke depression is a common problem. About 795,000 people in the United States have a stroke each year and one third of survivors develop depression as a result,” said study author Arlene Schmid, PhD, OTR, with the Richard L. Roudebush Veterans Affairs Medical Center and Indiana University in Indianapolis. “We wanted to see whether depression and other factors affected function and dependence after a stroke.”

For the study, researchers gathered information about 367 ischemic stroke survivors with an average age of 62 with no severe language or thinking skill impairments. Of those, 174 were diagnosed with post-stroke depression one month after the stroke.

The participant’s level of independence was rated using a zero to five scale with five being the most severely disabled and dependent. Three months later, 20 percent of participants were considered dependent, scoring a level three or higher.

The study found that stroke survivors with depression were more likely to be dependent if they were older, had other coinciding health problems or were severely depressed compared to those who were younger (64 vs. 59), free of other health problems (18 vs. 15 points on a test for co-morbidities), or not depressed (16 vs. 14 points on a patient health questionnaire).

The study did not determine whether improvement in depression helped people with recovering their independence after three months.

“Even if the treatment and improvement of post-stroke depression does not directly influence recovery, it is extremely important for depression to be identified and treated since it is associated with other health and social problems,” Schmid said.