You are here: Home › Perceptual Changes Are A Key To Our Consciousness
By Christopher Fisher, PhD on November 19, 2010 in Brain Imaging, Cognition

With his coat billowing behind him and his right eye tightly closed, Captain Blackbeard watches the endless sea with his telescope. Suddenly the sea disappears as the pirate opens his right eye. The only thing he sees is his hand holding the telescope. And then, a moment later, the sea is back again. What happened was a change in perception. Our brain usually combines the two slightly divergent images of our eyes into a single consistent perception.

However, if the visual information does not match, only one image is seen at a time. This phenomenon is called “binocular rivalry”. Researchers around Andreas Bartels at the Werner Reichardt Centre for Integrative Neurosciences (CIN) and the Max Planck Institute for Biological Cybernetics in Tübingen, Germany used this phenomenon to decipher a key mechanism of the brain functions that contributes to conscious visual perception.

We do not consciously perceive everything around us, even if it falls into our field of vision. The overwhelming abundance of information forces our brain to focus on a few important things; our perception is an ongoing process of selecting, grouping and interpreting visual information. Even though we have two eyes, our brain combines the two impressions. Experts call this binocular vision. Yet, if conflicting information is presented to the eyes, only the input to one eye is perceived at a time, while the other is suppressed. Our perception changes at specific intervals between the two images – a phenomenon called “binocular rivalry”. This process occurs automatically without voluntary control. 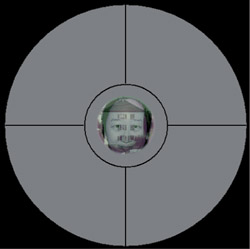 The scientists, Natalia Zaretskaya, Axel Thielscher, Nikos Logothetis and Andreas Bartels demonstrated that the frequency at which alternations between the visual information occurred could be experimentally reduced: Two different stimuli, a house and a face, were projected into the right and left eyes, respectively, of 15 experimental subjects. Since the brain could not match the pictures, alternations in perception occurred. When the scientists temporarily applied an alternating magnetic field to the subjects’ posterior parietal cortex, a higher-order area of the brain, the perception of each individual image was prolonged. 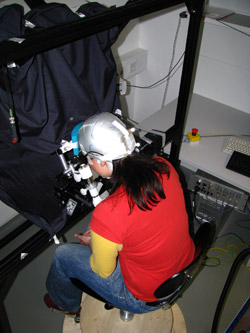 A proband seated in a confortable chair, with her chin on a chin rest conducting an experiment. A CRT monitor with shutter glasses was used for the dichoptic stimulus presentation. Picture: Max Planck Institute for Biological Cybernetics Tübingen.

“Our findings suggest that the parietal cortex is causally involved in selecting the information that is consciously perceived,” explains Natalia Zaretskaya, a Ph.D. student involved in the project. “It also demonstrates the important role of this area in visual awareness.”

“Understanding the neural circuits underlying the percepts and their switches might give us some insight into how consciousness is implemented in the brain, or at least into the dynamic processes underlying it,” explains Andreas Bartels, scientist at the CIN.