You are here: Home › There’s An Elephant In The Room – It’s Called “Essential Hypertension”
By Stephen Elliott on October 9, 2010 in Biofeedback, Featured, Psychophysiology 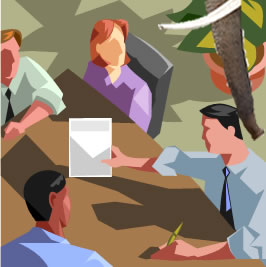 Hypertension is of epidemic proportions affecting 29% of the US population 18 and older and 67% of those over 60 years of age, making it one the single largest health concerns. [Data from NHANES 2005-2006, summarized in the January 2008 issue of the NCHS Data Brief].

Breathing is thought to affect blood pressure via the motive force that it applies to the movement of blood, in effect aiding the heart and vascular system in circulating blood throughout the body. This force is effected via the “thoracic pump” (see Figure 1) which generates negative pressure in the lungs during inhalation causing blood to rush through the vena cava and right heart filling the dense pulmonary capillary bed. The right heart facilitates this process via increasing heart rate yet with relatively low stoke volume and pressure (hence the need for increased rate). During the period of inhalation, blood flow out of the lungs into the left heart and arterial tree is slowed, reduced volume resulting in reduced arterial pressure. To limit this fall in volume and pressure, the arterial tree constricts to maintain pressure within viable range, however, blood volume and pressure in the arterial tree still fall. 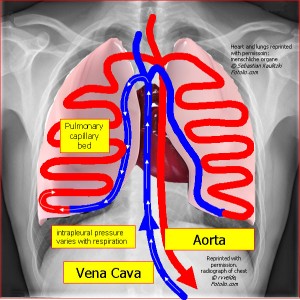 During exhalation, the large volume of blood that was stored in the lungs during inhalation is ejected into the pulmonary veins and the left heart under positive pressure, making its way into the arterial tree as a wave. This wave, referred to in medical texts as “the respiratory arterial pressure wave,” can be on the order of hundreds of milliliters of blood. As this occurs, the heart slows down and stroke volume increases in order to move this large quantity of blood through the left heart into the aorta. During the period of exhalation, blood pressure in the arterial tree rises, however, the arterial tree relaxes, increasing its volume in order to accommodate the wave of blood and to prevent arterial pressure from rising too much. However, blood volume and pressure in the arterial tree still rise.

The net effect is that when one breathes slowly, deeply, and rhythmically, the diaphragm does much of the “work” of drawing blood through the venous circulation to the lungs, a job that otherwise falls to the right heart. During exhalation, because of the large volume of blood being ejected by the lungs, the heart slows down. In other words, the heart gets to rest during inhalation because the diaphragm is facilitating venous flow and the heart gets to rest during exhalation because the diaphragm is facilitating arterial flow. When the diaphragm is not “contributing,” the job of maintaining blood flow and pressure falls to the heart and vascular system. Then the result of slow deep rhythmic respiration is an overall decrease in work performed by the heart and vascular system and with this decrease a reduction in systemic pressure. It is believed that while the heart gets more rest, the overall rate of blood flow actually increases, i.e. circulatory efficiency is maximal when we breathe slowly, deeply, and rhythmically.

When one is not breathing “adequately” the process described above makes little contribution to circulatory efficacy. To put it in perspective, the adult diaphragm has a maximum range of 10 centimeters of movement. Most adults breathing normally employ only 1 centimeter of this range. To effect desired changes in blood pressure, the range of diaphragm movement must be increased, ideally in to the 4-6 centimeter range, i.e. where 50% (vs.10%) of diaphragm range is normally employed. If one is to undertake to modify their breathing pattern in order to maintain healthy blood pressure, this re-training of diaphragm range may occur gradually.

Figures 2 and 3 demonstrate the blood volume in the capillary circulation as measured at the earlobe. Figure 2 is the respiratory arterial pressure wave of “non-breathing” and Figure 3 is that of resonant breathing. Figure 2 demonstrates little change in either volume, pulse amplitude, or heart rate. Figure 3 demonstrates dramatic variation in all three, this outcome being a function of slow, deep, rhythmic operation of the diaphragm and thoracic pump. 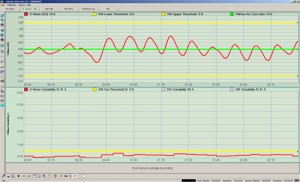 There are additional quantitative diagnostic indicators that can also be employed easily to determine if respiration is facilitating increased circulatory effectiveness and the internal changes that result in reduced systemic pressure. These include variation in blood volume during respiration as measured in the capillary circulation, and variation in the heart rate, which is thought to be an outcome of autonomic regulation due to variation in blood volume and pressure.

Figures 4 and 5 demonstrate blood volume variability and heart rate variability increasing over the course of 10’s of seconds while employing resonant breathing. 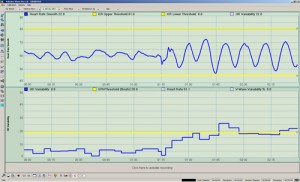 If breathing relatively slowly, deeply, and rhythmically does not facilitate variation in either blood volume or heart rate, the data seems to indicate that there will be little change in blood pressure after vs. before the initial “diagnostic” breathing intervention. This being said, if blood pressure is relatively high, and if significant positive changes in blood volume variability, and its correlate heart rate variability can be facilitated, blood pressure will almost certainly be reduced over the course of 8-12 minutes of resonant “coherent” breathing.

Stephen is the principle author of The New Science of Breath and Coherent Breathing: The Definitive Method. He is an avid heart rate variability researcher and the inventor of the “Coherent Breathing” method as well as “Valsalva Wave Pro” – an instrument that monitors the blood wave in the circulatory system produced during resonant breathing (See www.coherence.com and www.valsalvawave.com, respectively).
View all posts by Stephen Elliott →