You are here: Home › The Monkey Business Illusion – A Great New Take On A Classic Psychology Study
By Christopher Fisher, PhD on July 12, 2010 in Cognition, Featured

A new study finds that those who know that an unexpected event is likely to occur are no better at noticing other unexpected events – and may be even worse – than those who are not expecting the unexpected. The study, from Daniel Simons, a professor of psychology and in the Beckman Institute at the University of Illinois, appears this month as the inaugural paper in the new open access journal i-Perception. Test your own skill! Several videos from the study are embedded in this report.

The study used a new video based on one used in a now-famous experiment conducted in the late 1990s by Simons and his collaborator, Christopher Chabris, now a psychology professor at Union College in New York. In the original video, two groups of people – some dressed in white, some in black – are passing basketballs back and forth. The study subjects were asked to count the passes among those dressed in white while ignoring the passes of those in black.

Test your own skill at this task:

Simons and Chabris found that many of those who viewed the video failed to notice when a person in a gorilla suit walked into the game, faced the camera, pounded on its chest and then sauntered out of view. The gorilla was on screen for nearly nine seconds, yet half of those who watched the video didn’t see it.

This finding was a particularly dramatic example of “inattentional blindness,” the failure to see something obvious when focusing attention on something else.

The video is now so well known that many people know to look for a gorilla whenever they are asked to count basketball passes. Simons decided to use its notoriety to his advantage. He created a similar video, again with teams of white- and black-clothed players, the same rules, and a chest-thumping gorilla.

Before reading further, try the task for yourself:

Simons wanted to see if those who knew about the gorilla before viewing the video would be more or less likely to notice other unexpected events in the same video.

“You can make two competing predictions,” Simons said. “Knowing about the invisible gorilla might increase your chances of noticing other unexpected events because you know that the task tests whether people spot unexpected events. You might look for other events because you know that the experimenter is up to something.” Alternatively, “knowing about the gorilla might lead viewers to look for gorillas exclusively, and when they find one, they might fail to notice anything else out of the ordinary.” 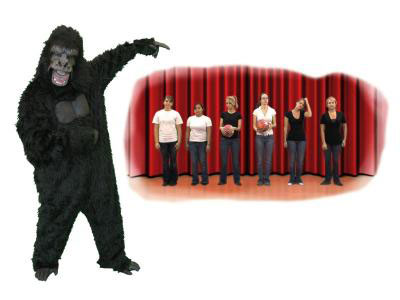 By modifying a famous experiment involving a person in a gorilla suit and two teams of people passing basketballs back and forth, Simons demonstrated that expecting the unexpected does not improve one

This difference between the “familiar” and “unfamiliar” viewers of the video is not statistically significant, Simons said, but the study does demonstrate that being primed to the possibility of unexpected events does not enhance one’s ability to notice other unexpected events.

“The main finding is that knowing that unexpected events might occur doesn’t prevent you from missing unexpected events,” Simons said. “People who are familiar with the purpose and conclusions of the original study – that people can miss obvious events when focused on something else – still miss other obvious events in exactly that same context. Even when they know that the experimenter is going to fool them, they can miss something that’s obvious, something that they could spot perfectly well if they knew it was there.”

The video itself, called “The Monkey Business Illusion,” was a finalist in the Neural Correlate Society’s Best Illusion of the Year contest in May, where Simons donned a gorilla suit and presented the new video himself.

Take a look at his presentation:

Daniel Simons’s presentation of “The Monkey Business Illusion” at the Best Illusion of the Year contest in 2010. He gave the presentation while wearing a gorilla suit.

Most of the vision scientists in the audience knew about the original gorilla video, and yet most still missed one or both of the other unexpected events in the video.

Simons is the co-author, with Chabris, of “The Invisible Gorilla, And Other Ways Our Intuitions Deceive Us,” a new book that focuses on common – and yet false – intuitions about how our minds work that often are wrong. Visit The Invisible Gorilla for more information about the book and other videos demonstrating the limits of visual awareness.

Material adapted from University of Illinois at Urbana-Champaign.